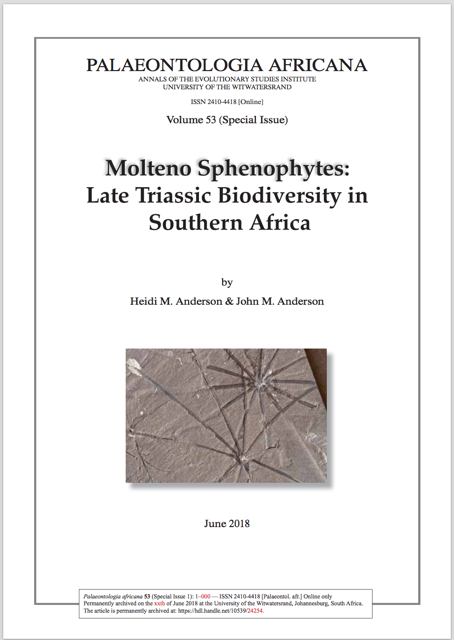 This e-book is a sequel to the previous four monographs on the Upper Triassic Molteno Flora of southern Africa. It describes and extensively illustrates many new species of fertile and vegetative sphenophyte material from the well collected and biodiverse Molteno Formation.

This comprehensive systematic study of the sphenophytes (Equisetophyta, horsetails) is the fifth monograph in a series describing the flora of the Molteno Fm., Karoo Basin (Late Triassic, Carnian) of South Africa. The introductory part of the study gives an overview of the Molteno flora and fauna and its significance in global context. In the collection of ca 27 200 catalogued slabs, the sphenophytes fall third, after Dicroidium and the conifer Heidiphyllum, as the most abundant vegetative elements. The study is based on 43 super-localities encompassing 100 assemblages or taphocoenoses (TCs). Sphenophytes occur in 59 of the TCs. In 16 of these TCs, they are the mono-dominant plant group and represent the ‘Equisetophyte marsh’ habitat; in a further 18 TCs, they are common to co-dominants; and in the remaining 25 TCs they occur sparsely to rarely. Habit-habitat reconstructions have been made for nine of the Molteno sphenophyte species. These occur in ‘Equisetophyte marsh’ and ‘Dicroidium riparian forest’ habitats. Present evidence suggests that these plants were not only dominant in much of the Molteno floodplain but also grew to sizes similar to modern giant bamboos, and may be referred to as giant horsetails. The described material includes a total of fi ve genera and 14 species of dispersed strobili; and eight genera and 23 vegetative species. The latter are mostly based on leaves attached to stems but include one species of isolated leaves and one of sculptured stems. Other isolated stems and nodal diaphragms are recorded but not named at generic or specific level. These fertile and vegetative genera fall in two distinctive orders – the Echinostachyales and Equisetales. None of the strobili have been found attached to vegetative material (grade 5 affiliation). In one case, Kraaiostachys plaatkoppensis (from Kra 211), a numerous collection of strobili is found in monospecific association with vegetative material (grade 4 affiliation). In all other cases, the affiliations are based essentially on co-occurrence of lesser levels of certainty (grades 2–3,5). In terms of whole-plant taxa, two orders, three families, seven genera and 26 species of Molteno sphenophytes are recognised. This study describes 14 new fertile and 23 new vegetative species. These fall in two previously described strobilus genera (Echinostachys, 1 sp; Equisetostachys, 9 spp) and six previously described vegetative genera (Schizoneura, 2 spp; Paraschizoneura, 4 spp; Asinisetum, 1 sp; Townroviamites, 3 spp; Zonulamites, 4 spp; Equisetites, 6 spp). A total of three strobilus genera (Cetistachys, 1 sp; Kraaiostachys, 1 sp; Viridistachys, 2 spp) and two vegetative genera (Moltenomites, 2 spp; Balenosetum,1 sp) are described as new. All genera and species are described following the format established in the previous Molteno monographs, and are extensively illustrated (pen sketches, black/white and colour photographs). In Gondwana Triassic context, the Molteno sphenophytes are now by far the most comprehensively known and the most diverse. Included is a review of all known Gondwana Triassic plant-yielding formations which reveals a total of 10 whole-plant genera and 42 whole-plant species of sphenophytes. A global review of sphenophytes including Laurasia and other geological periods has not been attempted, but the most relevant plants beyond the Gondwana Triassic have been compared.

Donate to the IOP!

Donate to the IOP